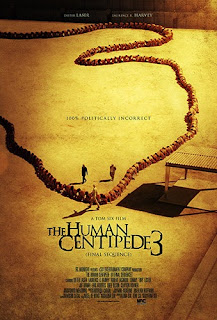 I've just finished watching this for the first time and felt the need to jump online and review/ defend it straight away.

Over the last couple of days I've seen a handful of early online reviews, all of them negative, I expected this. What bothers me though is the passion that's gone into the writing to say exactly how much they do dislike it.

OK, love or hate what you want, that's everyone's prerogative, but it seems to me that Tom Six is coming into a lot of personal assaults that you don't usually see heaped on a film just because someone found it boring, not their cup of tea and so on. Head's up guys- he wants to wind you up, so job done.

Anyway, I won't waste any more time pulling other critics apart, instead I'll briefly give my own thoughts about why I thought the opposite to what seems to be the general online consensus at the moment.

First off, Dieter Laser is astounding!! I could of watched him play Bill Boss all day. He's insane, sick, twisted, hilarious and totally off the wall. Here's a tip - if you can, try to watch this at least once with the subtitle track on or you may miss half of his inspired, totally offensive one-liners because of his constant yelling in a strong, drunken German accent.

Third, this isn't like the other two films. You've got a much bigger scale of film here, more money, bigger sets, a cast of many, this thing has legs!!!

What did I appreciate? Its extremeness, its humour, the acting, the story, the soundtrack, the cinematography, the caterpillar...... Hell, I loved it all.

Bottom line - this ain't for everyone, but you surely to god know what you're getting into by watching it?! So don't complain!

Check out the trailer here: